I just got the Nyxus doll. Fantstic work Jennifer. My jaw dropped when I pulled the doll out of the package. How…the HELL…did you do those WINGS on her? just terrific. Its not just a doll…it's a work of art.

There are no users currently online 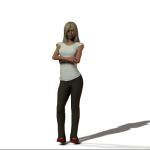 active 1 day, 2 hours ago
Happy Easter! (For those that celebrate it!) View

Click on shop in the menu for books, soft action figures and other awesome goodies! Dismiss